He’s a demanding little guy, and is always testing and trying to manipulate me. I’m stubborn. But so is he. Being a kindergarten teacher, I thought I’d be able to be firm and stand my ground with my own little person, but my God he wears me down sometimes. Regardless, I love him, and I’d do it all again…maybe with a little more sleep training. Despite existing in a very thick fog, during our first year together, I thought I felt like myself all along. However, now that he’s becoming much more independent and allowing me to get more sleep…and now that we’ve made it past the one year mark, I truly am feeling more myself. I’m ready to dance again, I’m ready to take claim of more of my ‘me’ time.

I’m not back at work yet, and love being home with my little person…but if I had to go back to work next week, I’m fairly confident I’d be okay with it. My bank account definitely would. As I’ve mentioned before in a previous post, mothering is one of the most natural things I’ve ever done. It feels like second nature to me, but one year later, doesn’t mean I have all the answers to what mothering entails.

My babe is still breast fed and he’s obsessed. It actually drives me a little crazy at times. He wants them all of the time; whenever, wherever, however and there’s no appeasing or distracting him until he gets what he wants. I’m not ready to wean him though, not fully anyway. This ‘boob juice’ is just too good for him. Interestingly though, he’s hurting me a lot more now, than before. I’ve been fortunate not to have experienced too much trauma in terms of nipple pain during our feeding sessions, but lately…my God. His latch is so strong. It’s like his mouth is a vacuum and it’s on heavy duty. If I didn’t know better, I’d think he wasn’t being fed! Either way, he’s clearly not ready to be weaned and I’m home all day with him so why would I deny him? When I get back to work though, he’s going to have to learn how to deal! Mama’s taking her boobs back!

One day he loves food and the next, how dare I try to feed him. Sometimes feeding my lil guy is pure joy and it’s truly a pleasure to see him opening his mouth wide for the next spoonful of food. Or hear his lil ‘hmmmm’ sounds of appreciation and him urging me to give him more. Sometimes, he even licks his fingers and smacks his lips. It’s amazing to see such a little person enjoy food so wholeheartedly.

And then there are the times, when it is complete torture for us both. He doesn’t want to eat and I NEED him to eat. We both seem to be equally stubborn so it can be a pretty intense face off. Sometimes I win, but usually he’s the victor. Despite the literature on feeding toddler’s and attending a Toronto Public Health Program about healthy eating where they all say, “don’t worry about them not wanting to eat”…and that “they go through phases”, I’m so uncomfortable with the idea of him not eating a proper meal. In the back of my mind, I’m worrying about him making up for his lack of eating with my boobs…during the night. <insert eye rolling emoji>.

My little guy also seems to have a really sophisticated palate. He stopped wanting baby food fairly early on. He wanted what we were eating. He wants food with seasoning, and it better taste delicious, or he’ll let you know. He used to eat vegetables back when he ate pureed food, now he wants nothing to do with them. As such, I’ve resorted to sneaking them into his meals. Nowadays, if I can even get him into the high chair, mealtimes are often filled with negotiation and bribery (other big no-no’s in all of the literature for feeding a toddler). It’s exhausting. I worry about him becoming a fussy eater but know that I have to be patient and his fussiness is likely, as they say ‘just a phase’. 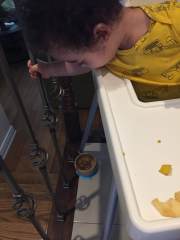 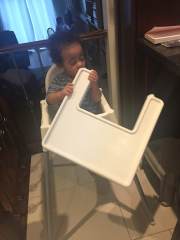 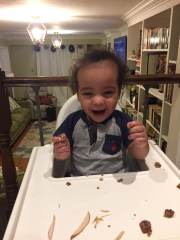 I was one of those people that said I wouldn’t let my child watch TV. Not too much anyway. I used to look at parents in shock and with disdain “Ugh, I can’t believe they just stick an iPad in front of their kid’s face and think that’s ok”, “Ugh, what kind of parent just sits their kid in front of the TV all day?”, “Ugh, look at them…poor kid has a screen for parents.” ‘No, that wouldn’t be me, I won’t do that with my child’. Well, I was wrong. The TV has been a saviour more than I care to acknowledge. We still have lots of ‘no TV’ moments, but if I need to prepare a meal, comb his hair, or have a phone conversation, you better believe I know I’ve got the screen as back-up!

A little over one year later, and I can no longer stay home all day long with my little guy. We’ve got to get out of the house or both of us go a little crazy. Fortunately, as long as our Canadian weather’s not too chaotic, we have many options. Having my son has made me more appreciative of where we live. There are many free programs for parents and caregivers to take advantage of with their little ones. It’s truly amazing. We go to Early ON child and family centres, programs run by Toronto Public Health, programs run out of the Toronto Public Library and drop-in swimming through Toronto Parks & Recreation. These programs are completely free and offer quality programming. Toronto is an extremely expensive city to live in and being on a maternity leave doesn’t bring in much excess funds. I, along with many others in this city NEED these programs. I pray our city and provincial government officials have some sense and the integrity to leave these programs intact as they only serve to better the communities and people they supposedly care about serving. 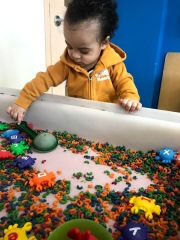 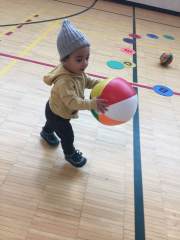 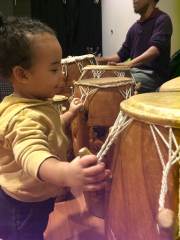 The natural high of having my baby has worn off. He consumes most of my time, but as I said before, I’m ready to get back to ‘me’ and doing the things I need to do to feel healthy and whole. Besides my regular library visits, I’d really like to resume getting mani’s and pedi’s but I know those won’t happen until I get back to work. I can however, put some of my focus on getting my body moving again. I’ve resumed dance (look out for more info on our show in June) and have increasingly, although inconsistently started doing Youtube Yoga. I DO NOT RUN, but am even contemplating doing a 5k run as well as an obstacle course event called Mud Girls as motivation to get me in the gym and moving my body again. I don’t want to make a fool of myself so I’m praying I can get my act together and make movement a regular part of my routine!

A little over a year has passed since I gave birth and have been home taking care of my little human. This time from work has enabled me to slow down and reevaluate the things that are important to me; besides taking care of my son. Writing is one of them, it’s paramount and the main reason for this blog. Regardless, I’m regularly overcome with the feeling that I’m not doing enough writing, let alone doing other things for my own self-care and well-being.

One year later, and with baby steps, I know I’ll get there. Like this blog, and my mothering, I’m a work in progress. It takes a while to break old habits and for new ones to form. It takes time getting used to being a mother and learning to make time for ‘you‘ but with time, focus, a plan and lots of patience I’ll figure it out. And so will you!

4 thoughts on “Motherhood: A Little Over a Year”