I’ve recently gone back to work after being off for almost two years and haven’t quite figured out how to do life with a child and a full-time job. I haven’t cooked (or written) in ages and have shamefully spent way too much money on Skip the Dishes which is even more shameful, because I live in a multi-generational home full of adults and am only required to cook once a week. If the ordering in was exciting, healthy and even slightly delicious it wouldn’t be so bad, but it wasn’t, it isn’t.

Anything really good is too expensive and/or doesn’t travel well. I subjected my family to endless meals alternating between pizza, fried chicken or fried rice and noodle dishes of some sort. No offence to any of those dishes…I used to love them all, but the lack of balance at which they were consumed, has for the time being altered my taste interests. Anyway, I’ve had enough and have seriously RESOLVED #2020resolutions, and promised myself and my family that I was NOT going to order in anymore. It’s expensive, unhealthy and boring.

I started my journey back into the world of preparing food for my family by taking inventory of what www.mamaearth.com graced our kitchen with for the week. I decided I was going to make a Chickpea & Mung Bean Curry. Unfortunately, despite my so-called preparedness I was still not yet used to what cooking entailed and forgot to go to the grocery store.

Determined not to spend another cent on restaurant food, I opted to make a Slowcooker Lentil Curry Surprise. We have very early starts to our days, and there simply isn’t enough time for my slow-poke self to cook in the mornings or evenings, while tending to a two year old. I don’t have those super powers yet. With that, this Slowcooker Lentil Curry Surprise was being cooked overnight.

What I scrounged for: 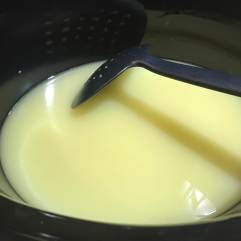 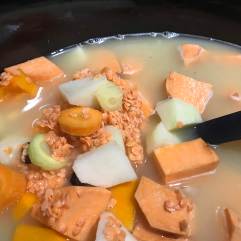 1. Poured a a box of soup broth into the slow cooker
2. Added one cup of lentils (washed) to the broth
3. Set the timer for eight hours and began preparing the rest of the ingredients
4. Peeled and diced about two cups of butternut squash
5. Peeled and diced a large sweet potato (I ended up with about 2 cups)
6. Peeled and diced 3 rainbow carrots
7. Poured the veggies into the broth and realized I needed onion and garlic
8. Chopped about half an onion (it’s all we had)
9. Minced four cloves of garlic
10. Threw in some old cherry tomatoes that were lying around
11. Threw in a generous tbsp of spices and left it to cook overnight.
12. In the morning, after tasting it, I added a bit more salt
13. I left it plugged in on the ‘warm’ setting (BIG MISTAKE)

What I should have done:

Everything was perfect until I left the meal on the warm setting, ALL DAY. I’d meant to unplug it before leaving for work, but completely forgot. When I returned home in the evening it was dried out and SAD. I was sure I’d ruined dinner and was trying to decide what to order. I was reassured that it would be fine and not to worry. I was worried though, and thought it wise to make a side of corned beef as back up.

Corned Beef (canned…this time it was in a pouch) a.k.a. ‘surprise’

1. Preheated a little oil in a small frying pan on low
2. added the corned beef (normally I would have cooked down some onions and/or tomatoes but we didn’t have any)
3. Add a little garlic powder, onion powder, black pepper
4. It was looking a little dry so I added some ketchup

I know this doesn’t sound appetizing at all, but it’s a staple ‘poor people’ dish in many Jamaican (and other Caribbean) homes. It’s cheap, quick, easy, can stretch, is incredibly versatile and it’s delicious.

In the end, as long as you didn’t get too much of the dried out almost burned part of the Lentil Curry Surprise, coupled with the corned beef and some brown rice…this meal was delicious! I was so proud in the end, because I didn’t give in and unnecessarily waste my hard-earned money. My meal was made with effort and love and I’m positive my family could taste it. 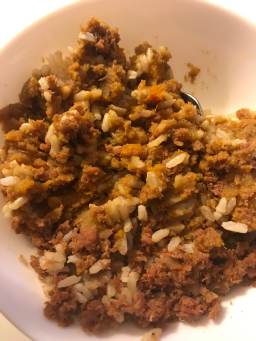 P.S. My sister doesn’t eat beef, and ate her Lentil Curry…without the surprise! She told me she was worried at first, but it was really good…I think she may have even taken the last of it for her lunch the next day.

One thought on “Lentil Curry Surprise”