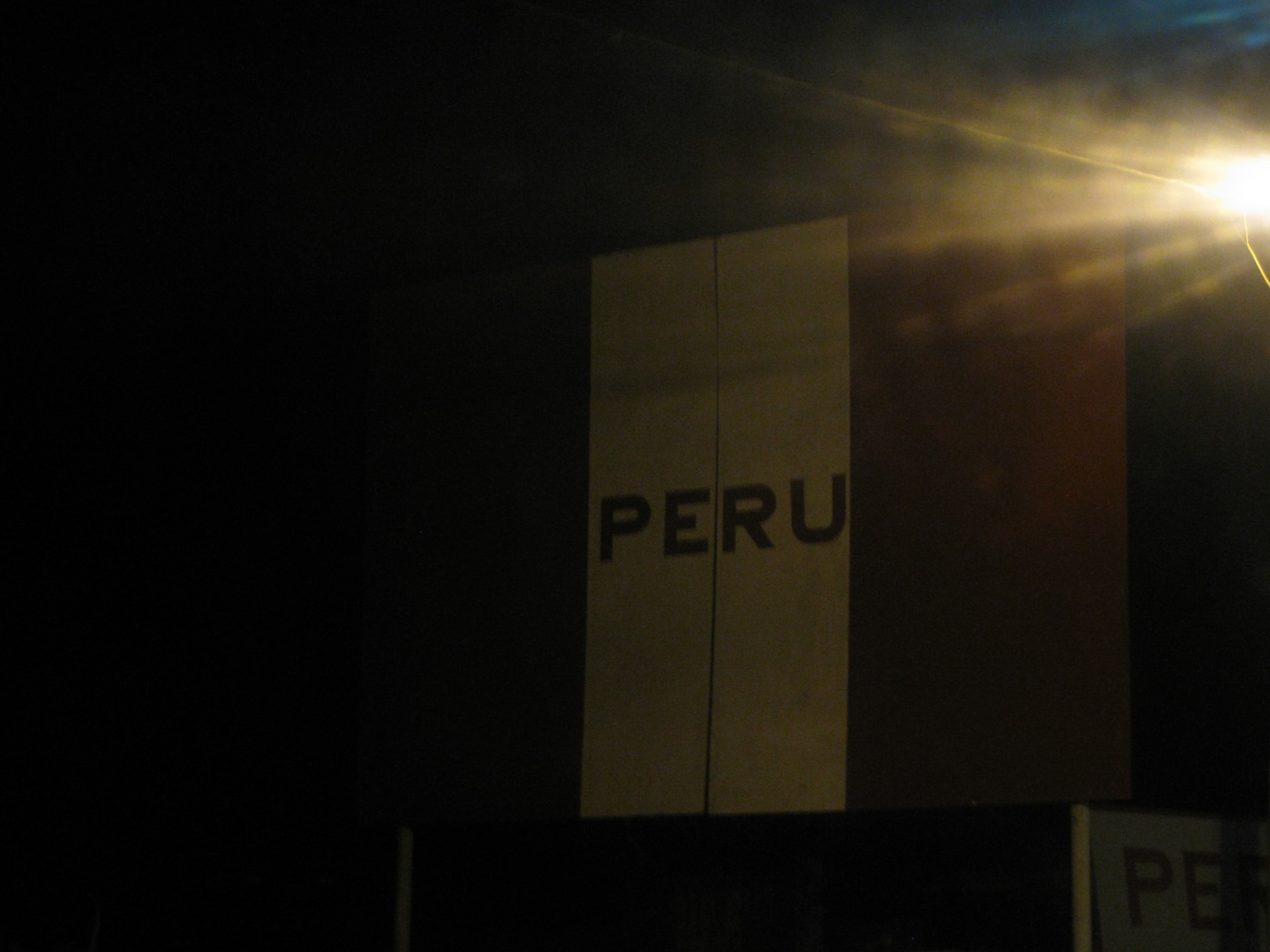 No matter how hard we think about it, we can’t figure out how we could have possibly entered a whole other country without knowing it. What about border control? Immigration officers? Passport stamps? We had seen nothing to tell us we’d entered Peru. We hadn’t heard anything either. No, “Passengers, we’ve arrived at our destination.” No, “Get your travel documents and see one of the immigration officers outside.”

All we had was our luggage, some money and our passports showing us as having entered Ecuador a few weeks ago.

I was stumped. My mind couldn’t comprehend our situation. There we stood, in the middle of some Peruvian city centre without the slightest clue of what to do next. It wasn’t even 6:00 in the morning yet and everyone was busily going about their day. How odd we must have looked. Did they even see us? Four black girls, loaded with luggage.

As everyone walked past us, I tried hard to remember everything that had happened prior to our current state of illegality. Nothing came to mind. I could not for the life of me figure out how we’d entered into Peru without coming into contact with Border Control and Immigration Officials and didn’t know what we should do about the situation. We attempted to ask for help from anyone who would listen. But no one paid us much attention. Well, not any attention that was of any use. We were four black girls wandering around somewhere in Peru. “Lovely.” I thought. “If this place is anything like Ecuador, they’ll think we’re just prostitutes or Colombian drug mules.” Our situation seemed hopeless, but we were determined. Determined to find someone who could help us.

“Perdon, senor...” “Senorita, por favor…” “Donde esta la immigracion?” We were either ignored and treated as though we’re speaking French or we were given the runaround for what seems like forever; finally we came across a taxi driver who seemed willing to help us.

“Donde esta la immigracion?” we asked almost all at once. “Habla ingles?” we asked pleadingly.

“We’ve just travelled from Ecuador and are wondering where we get our passports stamped?”

“The border is a little over an hour away,” he told us. “An hour away?!”  We were stunned. How the hell could we have gotten so far without going through immigration?

I’ve watched more than my share of ‘Locked up Abroad’ and I’ve seen ‘Brokedown Palace’ one too many times. Even though I know we had done nothing illegal, I also knew that we didn’t need to have done anything wrong to end up in some foreign jail or prison.

After talking to the taxi driver, we learned that the bus had in fact stopped at immigration. We must have fallen asleep and not one person thought to wake us up. How this was even possible made absolutely no sense to us, but the taxi driver explained that it happens fairly often. We had no intention of getting in trouble for being in Peru illegally, so we asked him “What do we do?” “How do we get back to the border to be properly documented as entering the country?” He said he could take us for $50 USD. Was he scamming us, we wondered? He seemed sincere enough. Together, we decided to trust him.

He explained that we couldn’t just walk up to the immigration office or we’d get in major trouble for being in the country illegally. He told us not to worry; he would tell us exactly what to do. We were terrified about being in trouble for breaking the law, so we agreed to pay him. We needed his help and no one else was helping. I couldn’t believe this was happening but knew I couldn’t go to prison in a foreign country. What are Peruvian prisons like…? I tried not to think about it.  None of it made any sense. We packed up his taxi with our luggage and jumped in. We were quiet, trying not to let our nerves get the best of us, while the taxi driver tried to reassure us that we’d be okay.

My brain was in overdrive. Were we being foolish tourists? Maybe we should’ve tried talking to the police. As we approached the Ecuador/Peru border the taxi driver explained that he could drive no further. He parked his taxi along the side of the road near some trees. And then he told us we were to ‘simply’ walk across the bridge, while making sure to never make eye contact with the armed guards patrolling said bridge. What the hell?!? He swore we were to trust him. His instructions were clear. “Solo Camina”, “Just walk” he said. “Walk casually to the other side of the bridge. Once on the other side, take a break. Grab a beer and then walk back.” On the way back, we were to properly check in with the immigration officers.

We took deep breaths and sent out a little prayer for protection and forgiveness in case we got in trouble. There were 4 of us, so we split up. Two walked ahead, and shortly after I walked across with my sister. “Act natural,” I silently told myself. “Eyes forward,” and, “Don’t make eye contact with the guards.” “Ignore the huge guns.”

We made it across unscathed. We joined our friends and hugged each other with great relief. The taxi driver’s words echoed in all of our heads. “Once across, grab a beer and take a rest.” We complied. We didn’t even like beer, but we weren’t going to ignore the driver’s advice. We sat. We breathed sighs of relief and we drank our Pilseners. Once we’d regained our composure, we confidently walked back towards the bridge to the border of Ecuador and Peru. We walked past the armed guards, still not making eye contact, but this time with small smiles on our faces and a lightness in our soul. We headed straight to the tiny immigration office. They barely said anything to us and we were thankful. Our passports were stamped, and we could finally breathe again. We were ecstatic. We couldn’t thank our taxi driver enough. We didn’t have much money but we gave him some extra…even if he was scamming us, he’d earned it.

The taxi driver took us back to the bus terminal where we grabbed a 1:00 pm bus to Mancora, a little beach town that’s a hub for tourists. After our ordeal, relaxation was our number one priority. During the ride to Mancora, I pulled out my camera to snap some shots along the way. As I turned my camera on, I saw a picture of a Peruvian flag, the same flag we had seen as we walked over the bridge from Ecuador, right there on my camera screen with the timestamp 4:43 a.m. 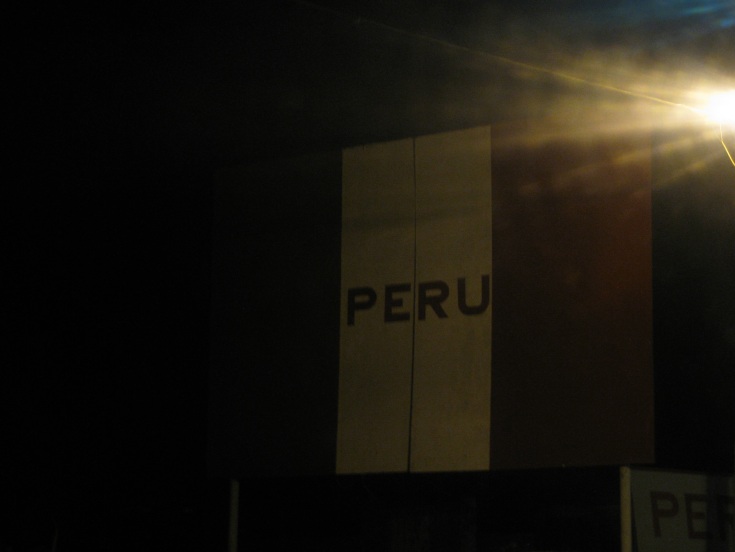